Our project and news archive...

In 2019 we were approached by the team at Lache Community Centre, working with Cheshire West and Chester Council's Localities team to develop a brand new project with the two schools that sit on either side of the centre, Lache Primary School and St. Clare's. These two schools had little experience of collaborating on a project and we decided that it would be a great thing to bring them together to create a piece of theatre all about the history and heritage of Lache. Minerva Arts historian Christine Brocken set to work over the summer, collecting material on the history of the area and we started the project in October, working with 35 young people. The final performance was shared in December and the children have all received Explore Arts Awards. We are hoping to be able to run the project again in 2020.

In January we were approached by Warrington Youth Club to help them deliver some creative elements to their current project looking at Disability Hate Crime through the eyes of young people. The project launched in March and will see us working with three cohorts of young people to explore the issues that they feel are vital within this important theme using drama methods and then creating a short series of films that will be showcased in June/ July.
Malpas Young Actors leader Emily Collins is facilitating the drama element of this project and she is woking with film-maker Chloe Barlow who is new to the Minerva team for this project.
So far the first group have really focussed in on identity and equality as the key issues of their film. The group are really creative so we can't wait to see the final products that they produce. ​

Summer 2019 was such as busy time for Minerva, starting off with our high portfolio of performance events in the summer term and continuing with our holiday club provision in Malpas, Lache and Middlewich. We are really thankful to all our lovely partners, Cheshire West Voluntary Action, Chester Bandstand, Sanctuary Housing, Lache Community Development Trust, Cheshire West and Chester Council, Midsummer Watch and the Malpas and Tarvin Villages fairs for supporting us to get our young people's work out there.

2018's Alternative Christmas Stocking was the biggest one yet with over 100 parents, family and friends joining us at St. Mary's Creative Space to share the work of our Cheshire West-based Youth Theatres. All six of our groups from this side of the borough shared brand new work with the appreciative audience and were supported by our good friends 'The Clock-Makers', led by former Chester Seniors Youth Theatre member Lloyd Ramsey. 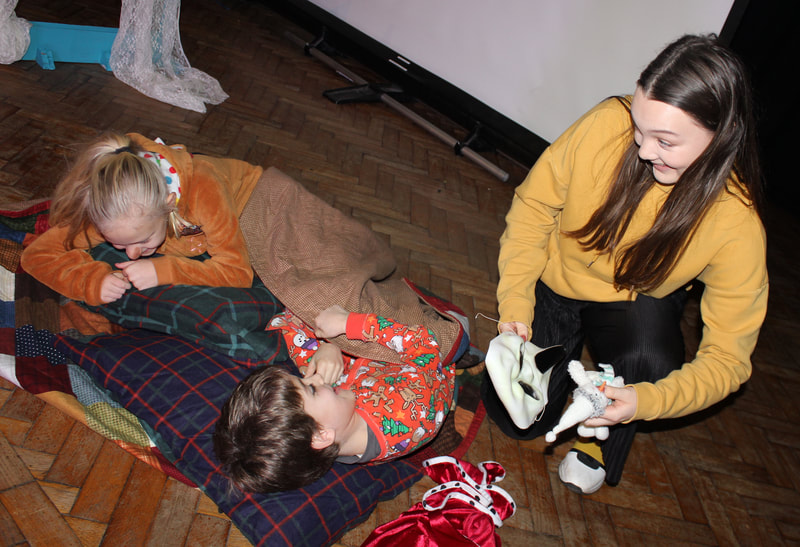 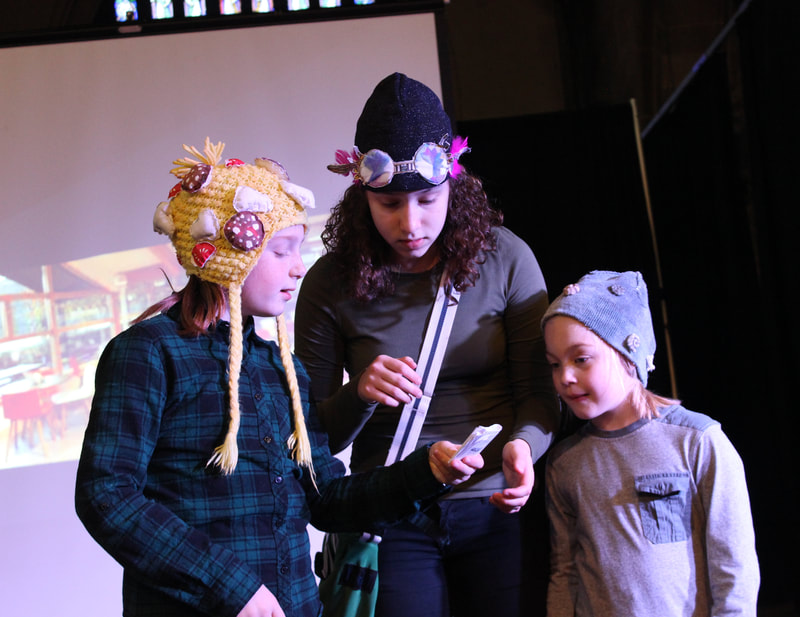 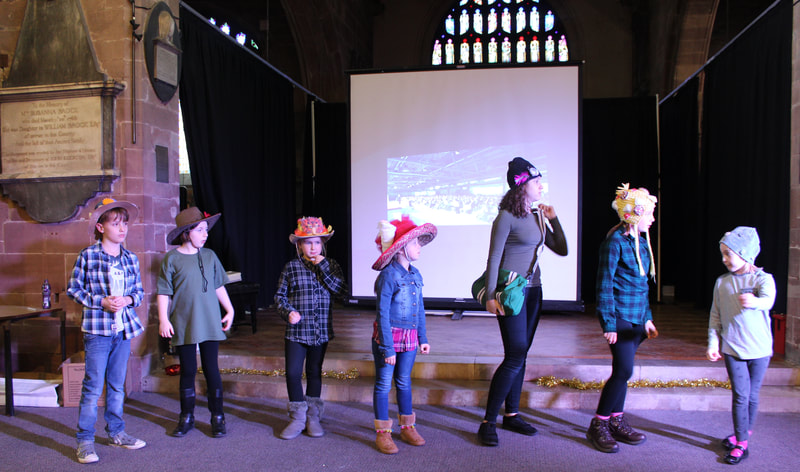 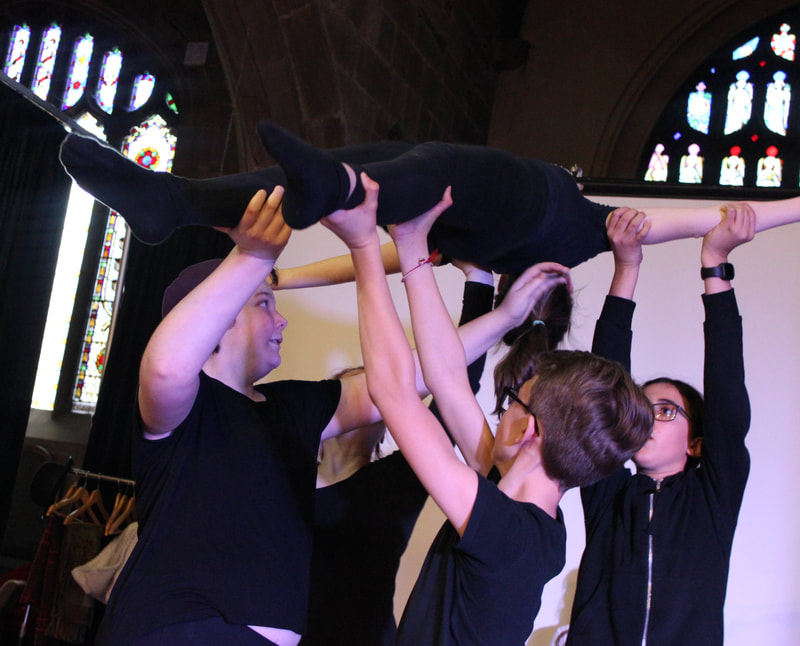 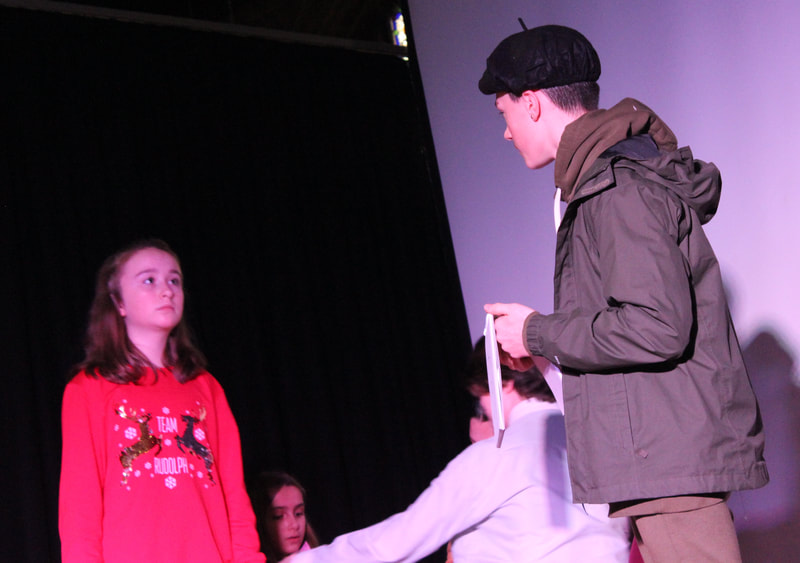 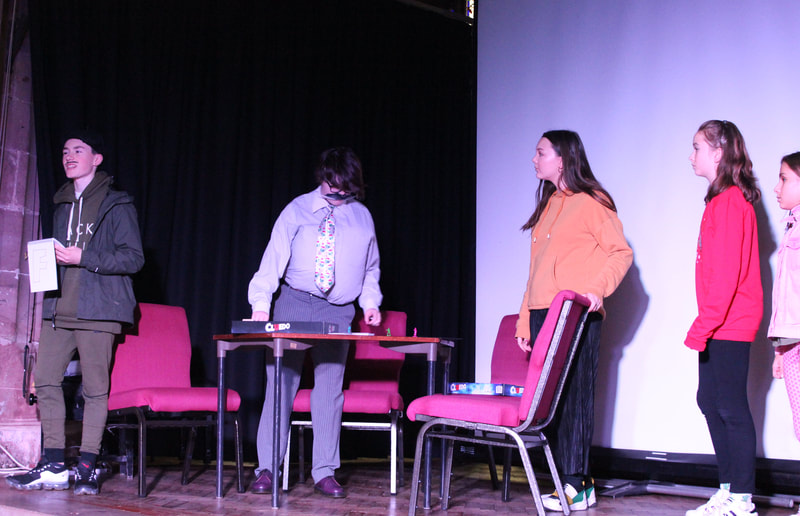 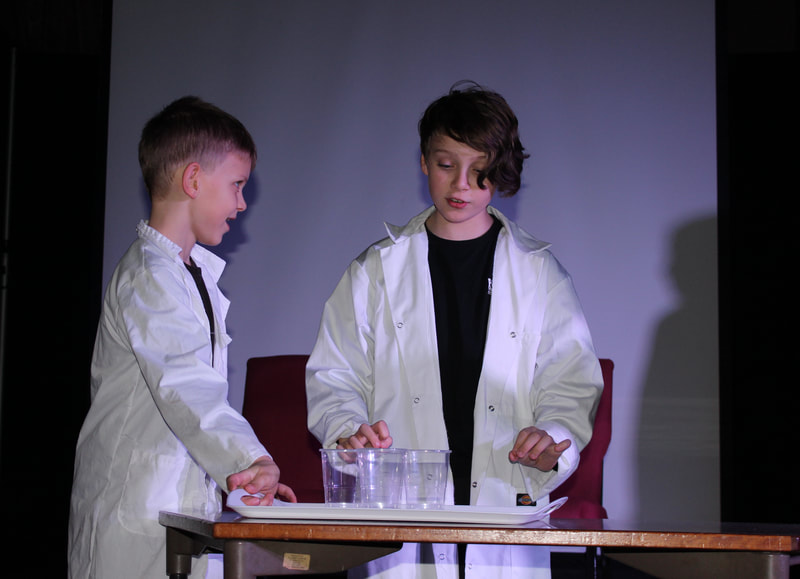 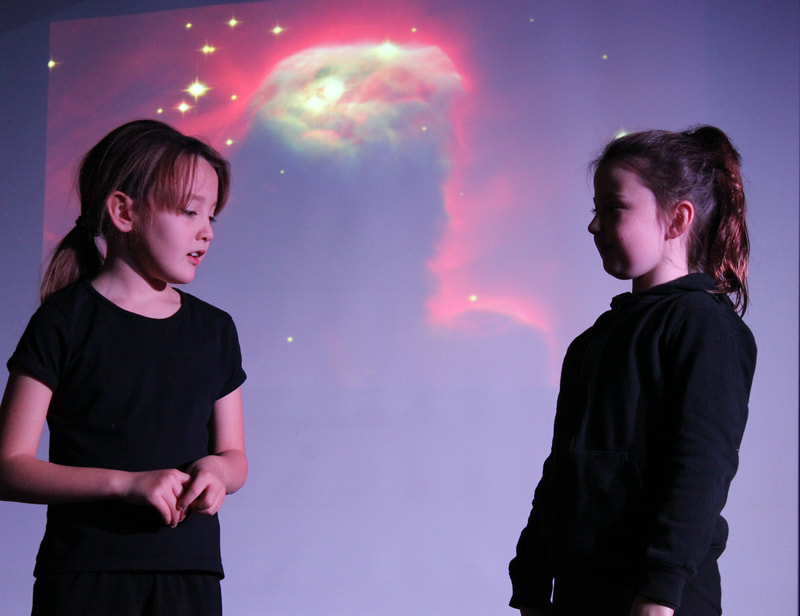 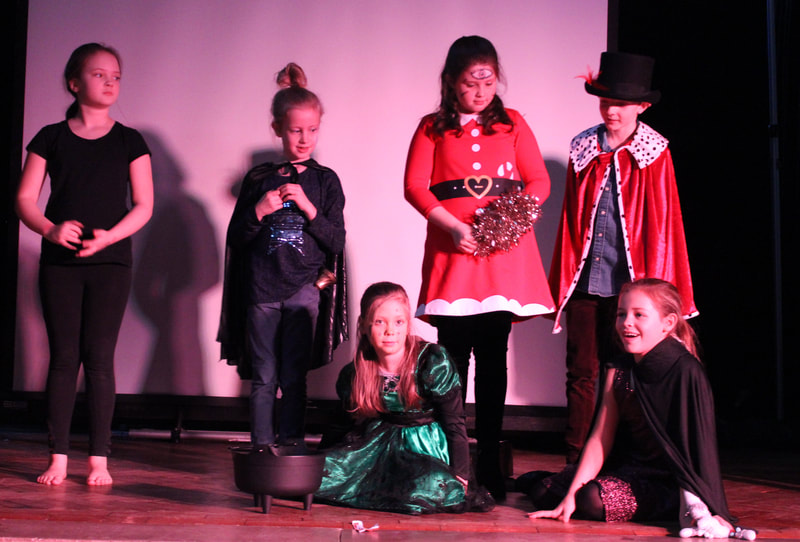 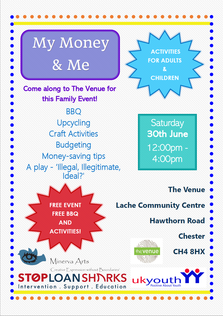 Our Stop Loan Sharks project has been running since October 2017. We have been working with second and third year students from the University of Chester to produce a brand new piece of Forum Theatre aimed at raising awareness of Loan Sharks and the good work that the Illegal Money Lending Teams can do to help people in these circumstances.
We performed to a group at the University in February and will be bringing the show to Lache, Blacon and Northwich in the next couple of months with the support of partners from Cheshire West and Chester Council, West Cheshire Credit Union and Age UK.
If you would like to find out more, share your story or request a performance, please get in touch here. We were thrilled to be able to bring the show to Lache in May 2018 with the support of UK Youth's Money for Life programme as part of our 'My Money and Me' family event.

After the success of the Active Youth programme, Minerva Arts has once again joined the delivery team for a UK Youth project. This time it's 'FutureProof'.
'FutureProof' aims to provide young people aged between 11 and 18 with the skills they need to lead healthy, happy lives while also developing their sense of personal agency and community responsibility.
The programme contains 8 optional modules covering everything from Healthy Relationships to Online Safety and Politics and anyone taking part in the programme has the opportunity to get a Youth Achievement Award at Bronze or Silver (worth 3/6 ASDAN credits).
We will be contacting our friends in schools and youth clubs across Cheshire with this offer very soon but in the meantime, if you would like further information about the programme, please get in touch via our contact page here.

Throughout 2016 and 2017, Minerva Arts were a delivery partner on a National Programme run by UK Youth and funded through Sport England. This programme focussed on improving levels of physical activity among young people aged between 14 and 25. This programme enabled us to run several different mini-projects with a wide range of different target groups including those with whom we were already engaging at Youth Theatre plus school groups at Blacon High and Bishop Heber High, Youth Club groups, College groups and brand new Youth Theatre development groups in Frodsham and Tarvin. We had a great time on this project and are looking forward to working with UK Youth again in the future. 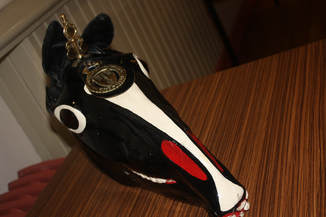 In December 2016 we were lucky enough to recieve funding from the Heritage Lottery Fund to run the 'Souling' project. This entailed a series of workshops and projects run with school and community groups across Cheshire West and East that explored the historic Soul Plays that were performed in Cheshire from the Medieval times up to the early 20th Century. Several places still perform their Soul Plays which are of a similar style and structure to other plays in the 'Mummers' tradition throughout the UK, but many dies out after the First World War. We loved this project and a full run-down of the activity was recorded on the Blog page which can be found here.
Partners on this project included: Bunbury Aldersay Primary School, Astbury St. Mary's Primary School, Knutsford Promenades, Rustic Music and Arts Festival, Virginia Kettle, Melissa Douglas, Duncan Broomhead and Bunbury Mill. 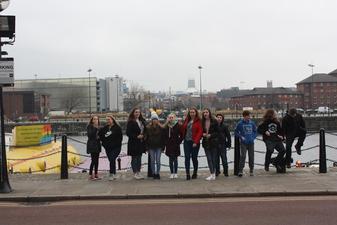 Minerva Arts worked with St Helen's Young Carers over the Half Term break in 2017. Funded by the Arts Award Access Fund we worked with young people aged 13-17, and over the week they got involved in exciting drama and film making workshops. As part of the week they completed a Bronze Arts Award and went to Liverpool visiting the Beatles Story and the Tate. The project culminated in the group creating a video which aims to raise awareness of young carers in the borough. It was a brilliant week, with the young people having lots to be proud of. 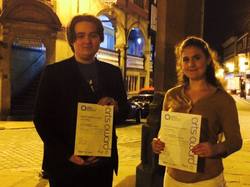 Chester based youth theatre, Minerva Arts has achieved their first ever Gold Arts Award, a nationally recognised qualification. Two of their members, Lloyd and Kate have accomplished the highest level which is the same standard as an A-Level and worth 35 UCAS points.


Arts Award’s unique qualifications support young people to develop as artists and arts leaders. The programme develops their creativity, leadership and communication skills.
Through working towards an award young people learn to work independently, helping them to prepare for further education and employment.


Artistic Director of Minerva Arts explains that ‘Arts Award is a really important part of what we offer at Minerva Youth Theatre as it enables our young people to be able to gain something tangible in reward for the hard work that they put in. Arts Award also helps us to build the leadership skills of our young people and demonstrates our commitment to developing the cultural leaders of the future.’


The youth theatre is currently open to anyone aged 11-18 and meet every Wednesday evening 7-9pm at the Kingsway Campus, University of Chester. The group work towards two public performances per year, varying from traditional, scripted shows to devised work created by the group themselves.


Lloyd who achieved the Gold Arts Award said ‘The opportunity to get an Arts Award was one of the main reasons why I decided to come to Minerva. It’s great to have taken part in so many shows and learnt so much and have a national qualification to show for it’.


Lloyd is now an ex-member and is undertaking a paid work placement at Minerva Arts through the Trailblaze programme which is a regional initiative. 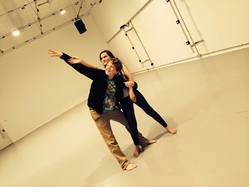 WIRRAL TO WEST AFRICA 2013
This project was a partnership project with River Niger Arts funded by the Heritage Lottery Fund. The project worked with students at Hilbre High School Humanities College in West Kirby, Wirral to bring the story of local hero Edmund Morel to life through dance, drama and music. As part of this project we also worked alongside the Wirral Festival of Firsts to share performance work created by the young people who participated as well as hosting our own final sharing at Hilbre. This project also culminated in the publication of a schools resource based on the workshops that were developed in the project.

ARTS IN THE VILLAGES 2013
This project was funded by Arts Council England and brought four professional artists working in different disciplines to four rural villages in Cheshire West. Young people between the ages of 6 and 16 participated in workshops in dance, drama, music and photography culminating in a final sharing that was held at Tarporley Community High School.
YOUTH THEATRE 2011-17
Shows our Youth Theatre have produced so far have been:
Brecht's 'Life of Galileo' 2nd and 3rd March 2012 at St. Mary's Centre and Queens Park High School
'MinervaLab' A Live Art Gallery July 2012 at the Wesley Methodist Church
'Against Basic Chorus' March 2013 at the Kingsway Campus
'MIN001' a sharing of Devised Work July 2013 at the Kingsway Campus
'Broken Tales and Twisted Stories' by Luke Moore and Rebecca Sowray Dixon 12th April 2014 at the Kingsway Campus
'Mabel's War' (7-11 Group) March 2014 at St. Mary's Centre
'MIN002' a sharing of Devised Work July 2014 at the Northgate Festival
'Welcome to Wonderland' based on an adaptation by Jim Johnson April 2015 at the Kingsway Campus
'Styx' July 2015 at Theatr Clwyd
'Fake Tour of Chester' as part of Chester Fringe October 2015
'The Tempest' At Kingsway, April 2016
'The Gyntish Self' At Kingsway, March 2017 and at the Nantwich Players Youth Drama Festival, May 2017
'The Dream Collector' by Fin Cullen, March 2019 at the Jubilee Hall, Malpas
Proudly powered by Weebly